I want to update you on the CRIBBS project and share with you information that you will find interesting. There has been discussion on the Facebook sites about seizures. I will share some information about that specific topic. As always I want to express my appreciation to all those that participate in CRIBBS and invite anyone that is not yet a member of CRIBBS to sign up at www.bbs-registry.org.

We are currently approaching 230 individuals that are participating in CRIBBS. Our goal is to be reach 300 participants by the end of 2016. The information that I present here will be from all individuals that had enrolled in CRIBBS as of January 13, 2016. There are 214 individuals included.

The age range of participants at time of enrollment range from 5 months to 65 years and it is essentially an even mix of males and females (105 males & 109 females). The pie graph shows the BBS genes that are represented in CRIBBS participants. The largest percentage of individuals has not had genetic testing performed or the genetic testing is inconclusive. That is the purple section of the pie graph. For visually impaired readers that makes up 51% of the total CIRBBS group. BBS1 is the most common genetic mutation followed closely by BBS10. 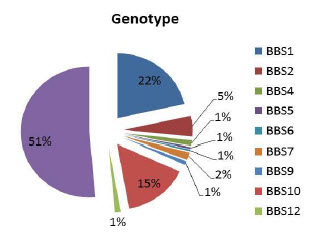 The age that BBS was diagnosed ranged from the prenatal period to 57 years of age. Although the diagnosis of BBS was delayed in many individuals early features of BBS are often found prenatally or in early childhood. Those features included polydactyly, bright (echogenic) & enlarged kidneys identified on prenatal ultrasounds, obesity and difficulty seeing at night.